A couple weeks ago, I posted about this in the Forum Downtime thread, but I figured I should make its own thread so I don't needlessly clutter up others.

Last year I started my Nth rebuild (honestly, I've lost count at this point) of the X-Bomber in 3D. I promised myself that I'd finish the darn thing in 2021, after starting and giving up and restarting several times over the years, and I'm going to use this thread to give myself a progress report at least once a month. I don't have a ton of time to spend on this project, though I wish I did. It's mostly weekends and the occasional evening. Plus, I'm doing this all on a 10-year-old computer that can barely run the latest version of Blender, but it'll get the job done somehow! My end goal, aside from a sense of personal accomplishment, is to post the models in the public domain for anyone else to use if interested and to convert and upload a version of them to Thingiverse, Shapeways, etc. for 3D printing.

When I last posted in the other thread, I had gotten the basic shapes in place for X-Bomber herself and had been whittling away at some of the detailed parts. After just a few very minor tweaks, though, I realized I needed to pause work on the main ship and get cracking on the three Dai-X components because they need to fit into the sides and bottom of the X-Bomber, and having them ready will help figure out some of the weirder proportions of those side blocks that the Mainbody and Legtrax dock into. 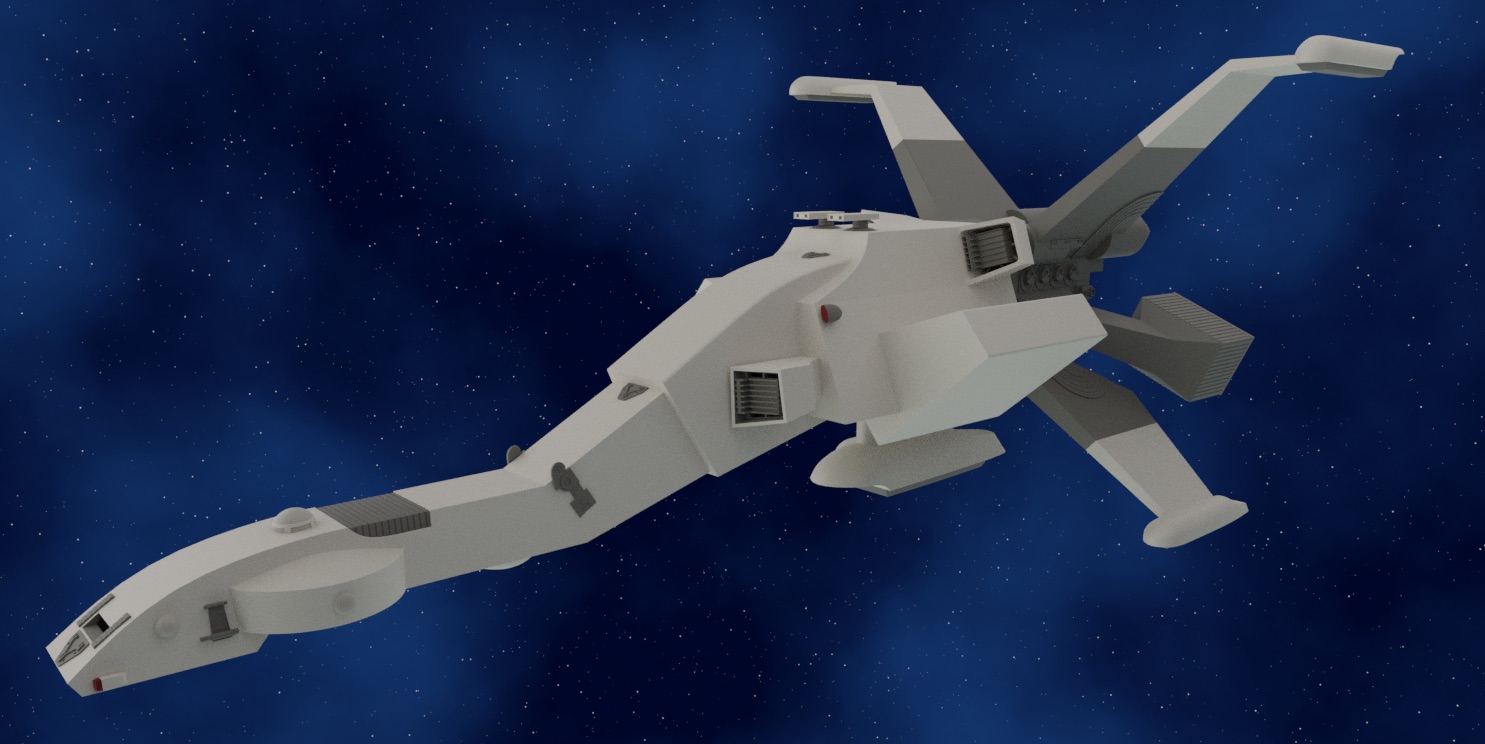 So, I got started on Dai-X's Mainbody! I've been building out the main shapes here too, and added a few details along the way just to give it some character. The upper chest plates with the grill fins (???) aren't quite right; I need to rebuild them and incorporate better into the main torso. Obviously the forearms and center cockpit parts need detailing too. 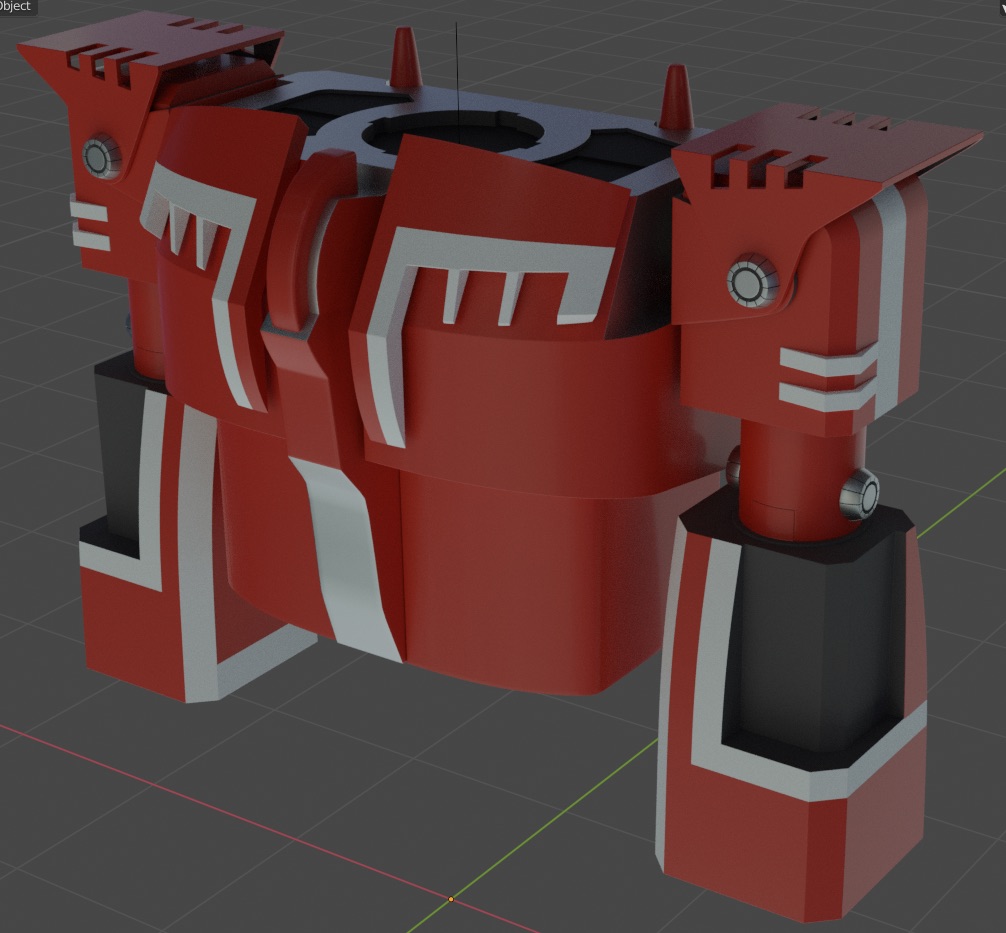 Colors on both models are temporary placeholders. I just assigned solid colors to groups of faces so I could get a general feel of things. I'll probably do some proper texturing later.

The updated X-Bomber is really impressive but I'm very much looking forward to seeing the Dai-X finished.
Dream big and bold and daring.
Top

Thanks! I actually still have most of my old models, and I was recently thinking about reopening them just to render a few higher-res images with consistent lighting and camera angles. Maybe before long I'll do that and post them to replace anything you might have on hand before you get too deep into reorganizing your galleries.

I confess I cringe pretty hard at some of my earlier work. I've always just been a big noob, learning a handful of modeling techniques along the way as I experimented with one thing or the other. Even now I sometimes step back and look at some wireframes and scratch my head wondering why things look weird and why I haven't figured out how to make it all work out a bit cleaner. In another life I would have gotten myself some proper training and hardware to really crank out some quality work, but c'est la vie!

If only I could find the time, I would love to go rebuild/remaster all the old things I've built over the years. I would say that rebuilding the Imperial Figher and Drone Craft are at the top of my "stretch goals" for 2021 once I finish off the X-Bomber and Dai-X. After those I would still like to revisit the various EDF fighters and the transport fleet ships.
Top

That would be lovely to see!

I have the distinct impression that anyone looking through the site and coming across your work from yesteryear would be very impressed.
I use the site like a kind of time capsule to keep Star Fleet content together in a more permanent way than you get with social media.

But within that, I only add content that I think really adds to the site.
I don't end up omitting much that way, I guess that says a bit about the quality of the work that you come across in general, but 3D modelling is a particularly painstaking and difficult skill as well.
Dream big and bold and daring.
Top

Two Bombardier X reference images according to me.
I wonder about the first one. Is it consistent with the proportions? The model seems elongated to me, I do not know.
The second is a fine work of d sheratt in the continuity of your work Brad.
This topic interests me because I have a project of 3d realization of the Bombardier X from the dai x evolution toys.

On the other hand, no 3d blender, no pla or resin printer, a pencil, a cutter and styrene will do for me.
I would like to illuminate the model and represent the Bombardier’s interior cannon called the duo laser frontal in France.
I’m very interested in your thoughts.
Top
Post Reply
5 posts • Page 1 of 1